During 2014 the Department for Education published guidance on promoting British values in schools to ensure young people leave school prepared for life in modern Britain.

In 2022 the Department for Education published new guidance relating to the Prevent duty to support designated safeguarding leads (DSLs) working in education settings.

These values were first set out by the government in the ‘Prevent’ strategy in 2011 and the Prevent duty for schools and childcare providers (2015).

All schools must have a clear strategy for embedding these values and show how their work with pupils has been effective in doing so, which will be taken into account during Ofsted inspections.

Examples of the understanding and knowledge pupils are expected to learn include:

Examples of actions schools can take to promote British Values are to:

There are many opportunities to include elements of British Values in programmes of PSHE education and the EYFS PSED. In fact these values are already embedded in these programmes, but it is important that education settings are clear about how these are demonstrated.

Many publishers, including Jigsaw, map the elements of British Values that are covered by their teaching materials.

Many Wiltshire schools explain this to children through their teaching, assemblies, displays and to parents in the form of a British Values/Prevent web page or leaflet.

From a young age schools and early years settings can help embed these values, which may include providing opportunities for children to: make positive connections and develop friendships with children of their own age, as well as adults; manage their own feelings and behaviour; negotiate and take turns; develop a positive view of themselves; share and respect each others opinions; challenge stereotypes and engage with the wider community.

Keeping children safe in education (DfE, 2021) mentions that  school and college staff should be particularly alert to the potential need for early help for a child who is at risk of being radicalised or exploited.

ACT Early UK - for families and communities who might be worried about someone.

Going Too Far? - for teachers, from the London Grid for Learning and the DfE, to explore extremist behaviour

Let's Talk About it website - practical help and guidance to the public in order to stop people becoming terrorists or supporting terrorism.

Safer Internet Centre - how to set up filters on your home internet to help prevent age inappropriate content being accessed.

Votes for Schools - weekly resources for schools, including around SMSC, British Values and Prevent.

Common Sense Media - (US site) search for guides on a variety of platforms, including how to set up parental controls on devices like Xbox one/iphone etc. You can also search the site for safety reviews on apps, games, and tv shows

Links to other relevant pages on this site

Wiltshire Police: in the classroom 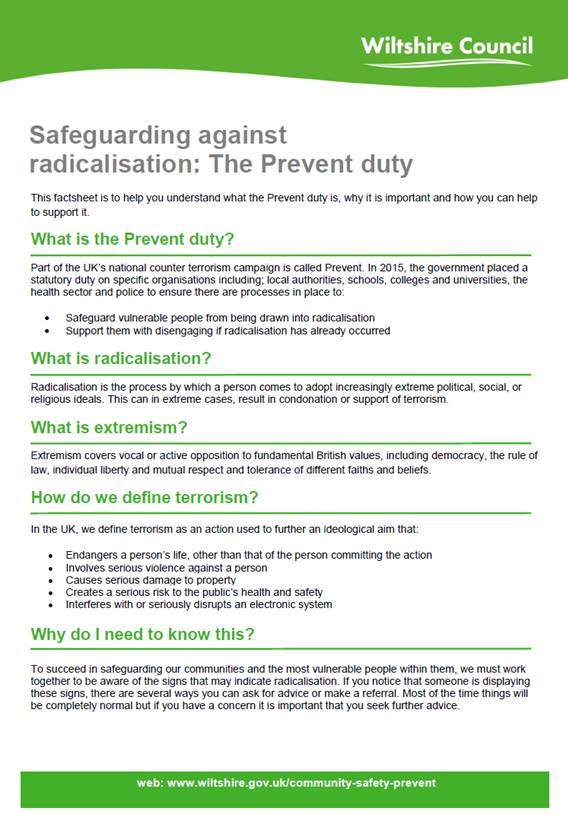 Wiltshire are looking for designated safeguarding lead representatives to take part in a pan-Wiltshire Prevent education sub group. The group will be taking place twice yearly (on Microsoft Teams) and will be an opportunity for updates on Prevent, additional training and a forum to ask questions on the key themes seen locally.

If you would like to attend please email: Preventqueries@wiltshire.gov.uk.

This document was originally sent to education providers that attended the Wiltshire and Swindon Prevent in Education Event on Wednesday 28th April 2021.

These new, quarterly information sheets will share training opportunities, updates from the multi-agency Wiltshire Prevent Board and Counter Terrorism Policing Southwest, to keep you posted on the latest on Prevent. These updates can be accessed by Wiltshire schools on Right Choice (login required).

Contact: Preventqueries@wiltshire.gov.uk if you have any questions or suggestions for future updates.

Resources for teaching about radicalisation

This free training offers an introduction to the Prevent duty, and explains how it aims to safeguard vulnerable people from being radicalised to supporting terrorism or becoming terrorists themselves.

Free e-learning from the Home Office on Channel awareness

The course is run by Wiltshire Council Public Health.

Sessions will cover an introduction to:

This course will run 4 times a year and is targeted at professionals working with vulnerable individuals of all ages, who may be in a position to identify vulnerability to radicalisation.

Schools can use this grid as a vehicle for gathering, auditing and presenting what they do in a format that fits with the DfE guidance on requirements.

Online Safety for aprents and Teachers 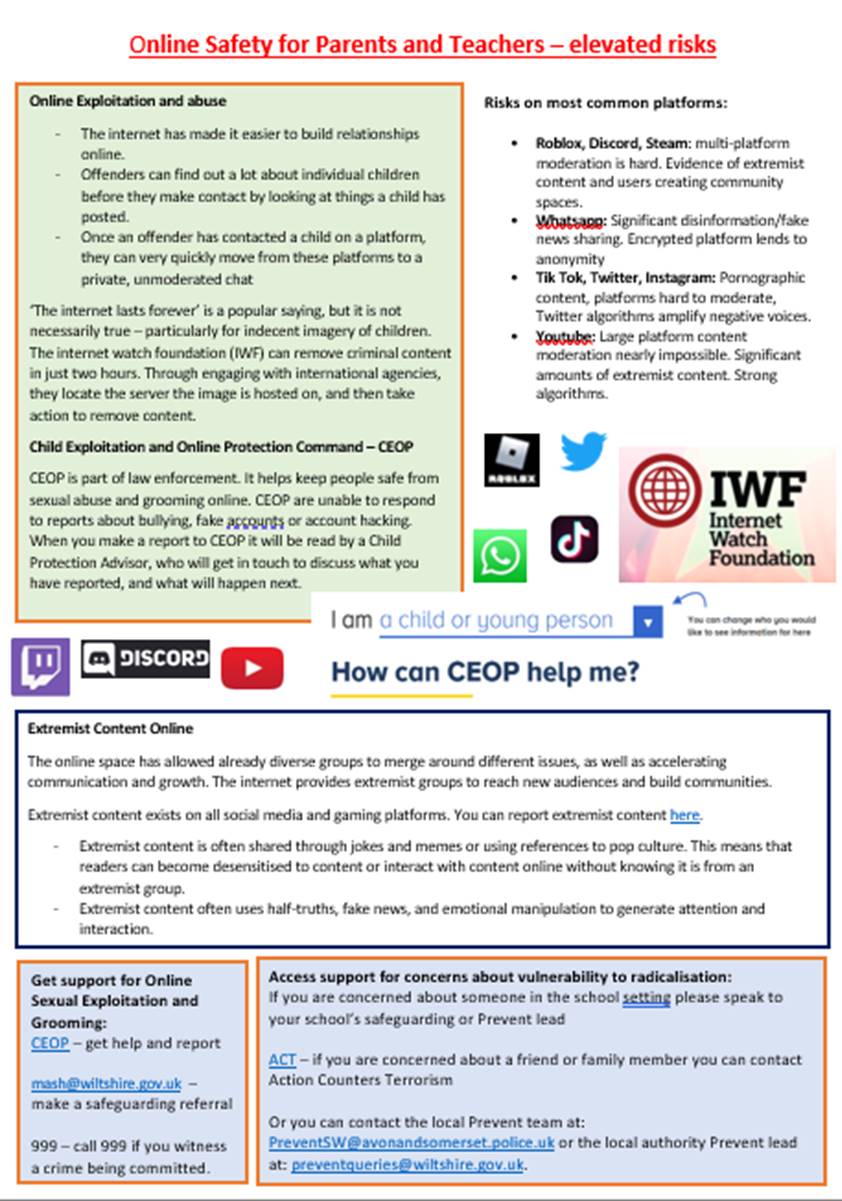