The United Against Bullying programme is the Anti-Bullying Alliance’s new whole-school anti-bullying programme. It supports schools to reduce bullying and improve the wellbeing of all children, focusing on those most at risk, including children and young people with SEND, children and young people who experience racist and faith-targeted bullying, sexual bullying, homophobic, biphobic and transphobic bullying, looked-after children, young carers and those on free school meals.

The overall aim of the programme is to establish United Against Bullying Schools. These are schools that have evidenced their work to reduce bullying and improve the wellbeing of all pupils.

The programme is FREE for all schools in England. Participating schools receive:

The theme of the week is Reach Out - more details and free resources here. 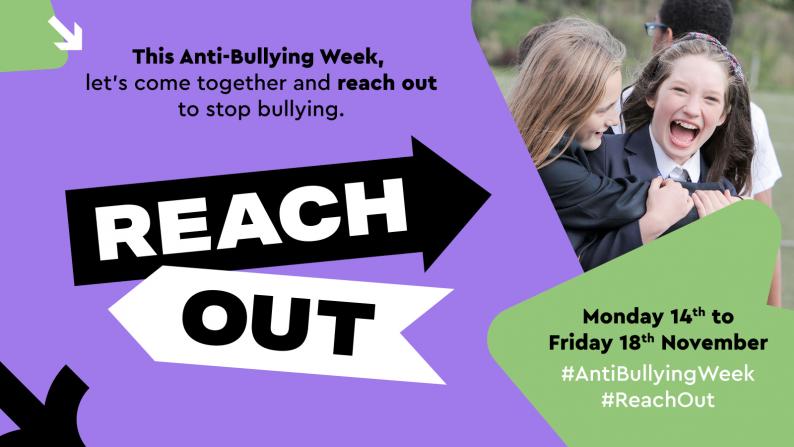 This report from the Education Endowment Foundation on 'Improving Behaviour in School' argues that bullying can be reduced through a number of approaches, such as:

And that these levers can be more powerful than sanction based approaches.

This campaign from 2018 is aimed at 11–18 year old bystanders in online bullying situations, with a supporting campaign for parents. The campaign highlights three simple steps that bystanders can take if they witness bullying – Stop, Speak, Support.

More details, including a school support pack can be found here.

Advice for parents, who would like to reinforce the code's messages, can be found on the NSPCC website here.

These podcasts were made for anti-bullying week 2017. Young people talk about bullying and explain what helped them deal with their experiences.

Being a Young Carer

The long term effects of bullying

The Wiltshire Assembly of Youth (WAY) helped shape a new charter which was launched during anti-bullying week 2016.

The charter sets out what bullying is as well as a commitment from partner agencies (including schools) to help ensure that individuals and communities respect each other, embrace difference, are inclusive and work together in partnership to reduce bullying.

The charter was distributed to schools in January 2017, along with key messages from young people. Other organisations throughout Wiltshire also received a copy of the charter, which can be downloaded below: 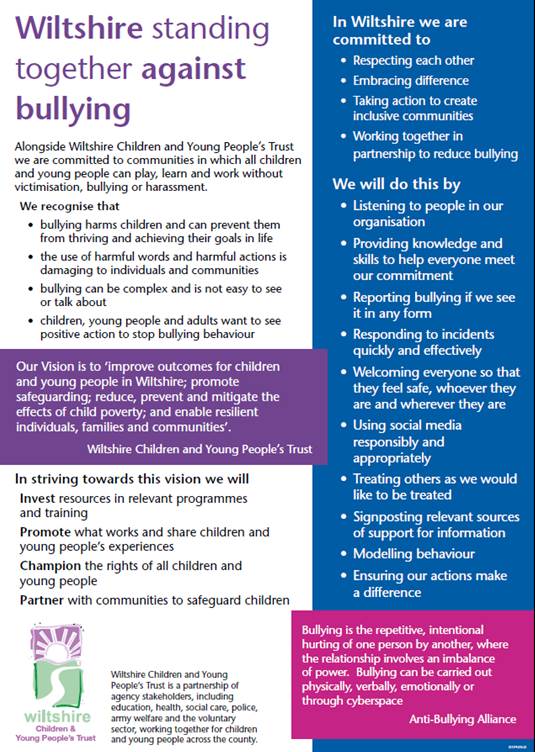 Wiltshire Council worked with the Anti-Bullying Alliance during 2015 and 2016 to become Anti-Bullying SEN and Disability Champions. As part of this work we were able to offer additional free training and resources for Wiltshire schools and help reduce reduce bullying in participating schools.

Free courses for both primary and secondary schools in Wiltshire were delivered during March 2017 by the Charlie Waller Memorial Trust to help support the emotional wellbeing of children who bully or who have been bullied.

Wiltshire schools provide evidence of how they prevent, monitor and respond to incidents of bullying as part of their Healthy Schools accreditation.

Links to many resources to help schools implement a wide range of anti-bullying practice can be found here: http://www.anti-bullyingalliance.org.uk/resources/

'Bounce back from bullying', Childline's online self-help tool for young people experiencing bullying aims to help young people: understand whether what they are experiencing is bullying; build their resilience; gain help and support from counsellors. The tool asks questions about different aspects of bullying, and gives young people the tools they need, based on their answers, to build confidence and seek support.

Resources, including primary and secondary lesson plans, to help schools address homophobic, biphobic and transphobic bullying from EACH: Inspiring Equality in Education: School pack (EACH, 2016)

www.onyourmind.org.uk website with information about bullying and links to support.